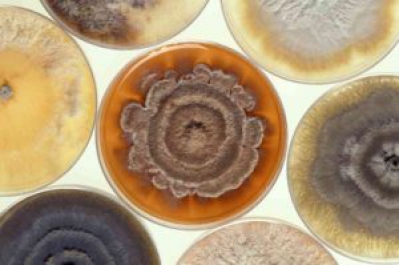 COMMON MOLDS FOUND IN THE HOME AND WORKPLACE

Which includes mildew, mold, mushrooms, rust and smut, are any of the major group of saprophytic and parasitic lower plants that lack chlorophyll that release disease causing toxins. The toxins released by this microbiological contaminant include Sperigmatocystin and Alfatorin B1 from Aspergillus which are carcinogenic. Fungus organisms growing in a water reservoir where antigens can be eluded and sprayed into the air as small droplets can be an agent for hypersensitivity diseases such as Hypersensitivity Pneumonitis. Fungus from agricultural sources in outdoor air are the most common cause of contamination indoors. Indoor sources include plants, carbon-based products, building materials, and wood products. The common locations in buildings for the majority of fungi growths include appliance drain pans, grain and meat food products, paper products, carpeting, ceiling tile, air conditioning duct work, plants, and soil used to pot plants. Microbiological contaminants require a food source and relative humidity level above forty percent (40%) to survive in most instances.

Alternaria: Fungus that grows as a parasite on both plants and plant matter. The toxic spores are easily made airborne and considered to be one of the most common causes of health symptoms due to an allergy to airborne spores, and it is an agent for hypersensitivity diseases and as a parasite in infections of lesions of the skin, soft tissues or nails.

Aspergillus: Common fungus that is found in soil and can be found growing on damp hay, grain, sausage and fruit; a known and documented aero-allergen that is the most common cause of respiratory disease in man and can be an agent for hypersensitivity diseases. It is also an opportunistic pathogen that can cause infections and is found as a parasite in lesions of the skin, soft tissues, or nails.

Basidiomycetes: A class of parasite fungus that grow mainly on grain plants; the group includes rust, puff balls, smut, mushrooms, and jelly fungi. They are not a major health threat, as they are most commonly found outdoors.

Botrytis: Fungus that is commonly found in areas of low ventilation with high relative humidity levels and it has a toxic odor like ammonia. It is usually an airborne fungus that looks very similar to yeast.

Candida Albicans: Airborne yeast that is universally distributed and can be toxic. It is found in soil, feces and nasal passages. Many health experts consider it to be a bacteria, rather than a fungus.

Cephalosporium: Fungus that is found as a damp soil inhabitant and that is a widespread saprophyte on fruits, leaves and rotting matter.

Chaetomium: Fungus that is usually found in the soil, but grows well on damp paper, fabric, and straw; it elicits an allergenic response in a moderate number of mold sensitive individuals.

Cladosporium (or Hormodendrum): A common fungus that is a known and documented aero-allergen which is usually associated with plants, wood products, and leather goods. The spores are easily made airborne and as such are a common cause of respiratory problems. Allergic reactions and can be an agent for hypersensitivity diseases. It is as a parasite in infections of the skin, soft tissues or nails and has been documented in cases of Blastomycosis, Candidiasis, Chromoblastomycosis, Histoplasmosis, Entomophthoramycocis, Phaeophphomycocis and Keratomycosis.

Curvularia: A fungus that is found in the soil of areas with very moist tropical climates. An opportunistic pathogen that is found as a parasite on tropical plants and agricultural crops, including beans, cotton, rice, barley, and corn, plant matter, and birds. The spores are easily made airborne, and can cause respiratory problems for many people.

Drechslera: a fungus that is an opportunistic pathogen that will typically infect those who are immuno-compromised; various species within this Genus have been documented in cases of phaeohyphomycosis which include cutaneous, subcutaneous, and systemic infections that develop dark-walled dematiaceous septate mycelial elements in host tissues.

Epicoccum: Airborne fungus commonly found as a soil inhabitant, but is also found in polluted water and carried by insects. It grows on plant leaves, decaying plant materials, uncooked fruit, textiles, paper products, and human skin. The health symptoms are congestion and runny nose that increase in the summer and early fall.

Fusarium: Common opportunistic pathogen that is a saprophyte of plants. Spores are easily made airborne and found as an infection causing parasite in various lesions of the skin, soft tissues or nails.

Geotrichum or Gliocladium: Fungi that are similar and commonly found as soil inhabitants and on decomposing plant matter, damp canvas, wood and paper products. An opportunistic pathogen that is a common cause of allergenic response for sensitive individuals.

Helminthosporium: Fungus commonly found on cereal grain plants such as corn, rye, wheat and oats. It causes a majority of the health symptoms due by inhalation of mold spores.

Humicola: Fungal organism that is a known and documented aero-allergen causing an allergic reaction to hypersensitive individuals even at low exposure concentrations. Chronic exposure at moderate to high airborne concentrations, may also result in the sensitization and the development of allergic disease in previously unaffected individuals.

Monilia: A soil-borne organism that frequently grows on bread and pastries. Extracts of Monilia produce skin test reactions in a moderate number of mold-sensitive patients.

Mucor: Phycomycetes that are normally a soil inhabitant, frequently found around barnyards, where it grows on animal waste. It is widespread and elicits allergenic response in a moderate number of mold-sensitive individuals.

Neuspora: Soil-borne organism which produces a tremendous quantity of spores and that grows on bread and pastries. Extracts product skin test reactions in a moderate number of mold-sensitive individuals.

Paecilomyces: Fungus that is a soil inhabitant which grows on damp paper and decaying vegetable matter. It is similar to Penicillium and Aspergillus, causing hypersensitivity and respiratory disease.

Penicillum: A known and documented aero-allergen which is commonly a soil inhabitant which grows readily on fruits, breads, cheeses, and other foods. This opportunistic pathogen produces mycotoxins that are toxic to humans. It is an agent for hypersensitivity diseases and is a parasite in infections of lesions of the skin, soft tissues or nails. Mutant strains of Penicillium are utilized to produce the antibiotic Penicillin.

Phoma: Fungus which grows readily on most paper products, such as magazines and books; it grows on some paints and green plants. Widespread in nature and frequently produces a skin rash or other reaction in mold-sensitive individuals.

Pullularia: Fungus normally found in soil and that grows on decaying vegetation, plants and chalking compounds. It frequently occurs in large numbers, but has a less clinical significance than other family members.

Rhizopus: A phycomycetes that grows readily on bread, cured meats, and root vegetables indoors. It grows on a variety of plants in nature and is very widespread in distribution. It will elicit an allergenic response in a moderate number of mold sensitive individuals.

Rhodotorula: Common yeast that is a frequent saprophyte on airborne dust, skin and the macosae. It is a common cause of respiratory problems.

Scopulariopsis: Fast-growing common fungus which is a saprophyte in nature, it is a causative agent for a nail infection as well as deep-seated granulomatous lesions.

Stachybotrys sp: Several strains of this fungus may produce a trichothecene mycotoxin- Satratoxin H - which is poisonous by inhalation. The toxins are present on the fungal spores. This is a slow growing fungus on media. The dark colored fungi grows on building material with a high cellulose content and a low nitrogen content. Areas with relative humidity above 55% and are subject to temperature fluctuations are ideal for toxin production. Individuals with chronic exposure to the toxin produced by this fungus reported cold and flu symptoms, sore throats, diarrhea, headaches, fatigue, dermatitis, intermittent local hair loss, and generalized malaise. The toxins produced by this fungus will suppress the immune system affecting the lymphoid tissue and the bone marrow. Animals injected with the toxin from this fungus exhibited the following symptoms: necrosis and hemorrhage within the brain, thymus, spleen, intestine, lung, heart, lymph node, liver, and kidney. The mycotoxin is also reported to be a liver and kidney carcinogen.

Stemphylium: Fungus found in tropical or high relative humidity areas especially near bodies of water. It grows in the soil of grass and grain lands, forests, polluted water, bark, decaying plant materials, cotton fabric, canvas, damp paper, and books. It is a cause of symptoms due to an allergy to airborne spores and an agent for hypersensitivity diseases.

Trichoderma: Fungus that is found mainly on decaying wood and is also found on damp cotton and wool, and in damp areas such as basements; it may be the most reacting mold, indicating a sensitizing ability in some people.

Unocladium: A fungus that is a known and document aero-allergen and an opportunistic pathogen. Exposure to this fungus may cause allergenic reactions, sensitization, Blastomycosis, Candidiasis, Chromo-blastomycosis, Histoplasmosis, Entomophthoramycocis, and Phaeophphomycocis Keratomycosis.

Verticillium: Soil inhabitant fungus that is similar to Penicillium. It is an agent for hypersensitivity diseases.

Fungus that did not produce spores in the laboratory culture; without sporulation a formal scientific classification cannot be determined.

Most environments (air, water, and solid surfaces) contain a variety of bacterial organisms. The type and concentration of bacterial organisms present are influenced by the prevailing conditions. Bacteria are microscopic parasites that are from one to five micrometers in size and that can live on living or nonliving organic (carbon compounds) in the presence or absence of oxygen. Bacteria excrete complex biochemical products that are instrumental in the decay of nonliving matter. A few bacteria are Obligate Pathogens that require a living host, however, most bacteria are Facultative Pathogens that can live on living or nonliving matter.

Gram staining allows for the separation of bacteria into two groups: Gram positive (+) or Gram negative (-). Cocci are very small sphered, while the rods can be spiral (spirilla) or straight (bacilli).

References site the comparison of outdoor and indoor concentrations as a means to evaluate indoor microbiological contamination. In 1987, the ACGIH (American Conference of Governmental Industrial Hygienists) stated that indoor fungal counts should be less than half of the outdoor level for a mechanically ventilated building. Fungal concentrations of 1000 cfu/m3 have historically been reported as being tolerable for an indoor environment (Morey 1984, and Breif and Bernath 1988), however more recent data suggest that the health effects from the inhalation of these spore quantities may be severe enough to recommend considerably lower tolerance limits (Etkin 1994). Indoor airborne samples should contain less than 300 cfu/m3 of the common fungi Cladosporium and less than 150 cfu/m3 of all other mixed species of fungi (Miller 1988). Fungal spore levels in excess of 500 cfu/mc in winter indicate that a building or residence has abnormal sources and/or insufficient ventilation (Reponen 1990).

Mold contamination is considered present in a building when the total mold spore concentration per cubic meter is above 10,000. (Baxter, ETS).

The National Allergy Bureau considers mold counts in air of 0-900 as low, to 2,500 as moderate, to 25,000 as high, and above 25,000 as very high. At “high” levels most individuals with any sensitivity will experience symptoms. Acceptable levels for individual species vary since species toxicity varies widely as does spore size, weight, and other features which affect risk to building occupants. Eg. Aspergillis/Penicillium in a “clean” residential building study was at a mean of 230, in buildings known to have a moisture or flooding problem it was at 2,235 and in mold contaminated buildings the figure was 36,037.